I like many others, have experienced frustration over the last several months. During these days in which we presently live, everything seems complicated. Perhaps more than ever, we must communicate clearly, fairly, and precisely. Before COVID 19 managed to wrestle away all other concerns from our consciousness, we United Methodists were about to have a historic General Conference.

Almost five decades of dispute over human sexuality were going to come to some type of amicable conclusion. We were going to agree to disagree and move on with our main task of bringing the “Kingdom to Earth, even as it is in Heaven.” But it seems that the delay in implementation – brought on by a worldwide pandemic – gave some individuals hope that they can change the conversation’s direction. They hoped to persuade persons to accept something different from what they believed before “sheltering in place.” This course of action concludes that the objections to thinking differently about human sexuality were not based upon deeply held Biblical standards, but upon some type of bias that has disappeared as our attention has been diverted.

I cannot tell you the number of times I have been asked if I thought the pandemic had changed people’s minds. If the answer were yes, what would that say? Would it not suggest that it was meanness or intolerance that had fueled objection? Now that we have all been subjected to this terrible plague have I changed my mind?

This line of thinking clearly shows that those in favor of same-sex unions in our churches and the ordination of self-avowed practicing homosexuals have failed to grasp that the objection to progressive doctrine is not hate-driven, preference driven, or politically driven. It is what we, as traditionally orthodox individuals, believe the Bible teaches. It is what nearly two thousand years of Christian doctrine has taught.

It is not that we do not wish to be “progressive” if that word is defined as finding new and creative ways to share a timeless message of hope and life. It is that we believe marriage was instituted by God Himself and is defined as “a man leaving his father and mother and cleaving unto his wife and the two becoming one flesh.” (Genesis 2:24)

While it is true that there are persons from each opinion who are less than kind, gentle, or self-controlled, that does not change the issue. We should not allow distraction to legitimize flawed doctrine. If you believed something was right or wrong before the pandemic based upon the Word, it is still so now. Why? Because words matter, especially the Word! 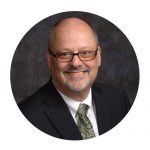 Robin is the Lead Associate Pastor at Asbury United Methodist in Madison, Alabama. He began his ministry as a local pastor at Centre-Lebanon United Methodist in 1978. He has served as a Full Elder at Geraldine First (‘87-‘90), Palmerdale (‘90-‘02), Guntersville First (‘02-‘08), and Clearbranch (‘08-‘12). In 2012 Dr. Scott was appointed the District Superintendent of the Mountain Lakes District, which he serve duntil 2018. Following that appointment he served as the New Church Director for the North Alabama Conference until 2020.

Dr. Scott attended Jacksonville State University where he completed a B.S. in Political Science. He also holds an M.Div. from Candler School of Theology and a Doctor of Ministry from Asbury Theological Seminary. He served on the Board of Ordained Ministry for twelve years, the New Church Team, and as delegate to both General and Jurisdictional conferences.

Dr. Scott has been married to Luann Ragsdale Scott for 42 years and they have two children and eight grandchildren. Robin enjoys golf, hiking, and spending time with family. He enjoys college football and basketball and Major League Baseball. He journals everyday and puts a devotion on Facebook most mornings. He walks at the local track most mornings and loves to read. At this point in his life his grandchildren and caring for his elderly Mom takes much of his time.